What are the differences between magic mushrooms (psilocybin) and ayahuasca? 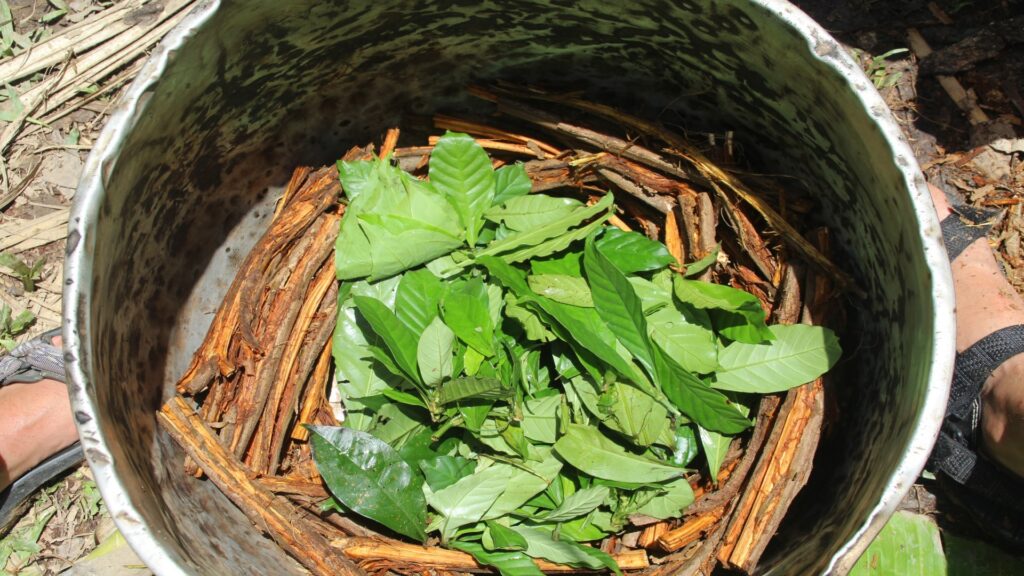 Those who delve into the world of psychedelic drugs come across substances such as psilocybin, DMT, mescaline and LSD. In this blog, we compare psilocybin and ayahuasca aka DMT. In fact, these substances have somewhat similar effects but do differ. Both have been used for hundreds, perhaps thousands, of years. Their mind-blowing effects can give us insights that can positively change our lives. So what are the differences between magic mushrooms and ayahuasca and what are the effects? You can read it below.

Ayahuasca is a drink that has been drunk in South America for centuries. The drink is made with two plants, namely the vine of Banisteriopsos Caapi (a pendulum plant) and the leaves of Psychotria viridis. Sometimes other plants are also added to the mixture. The mind-altering effect of ayahuasca comes from DMT (dimethyltryptamine) found in the leaves. The substances in the vine allow DMT to stay in the body longer and take effect.

The drink has a brownish-red color and tastes very bitter. The substances have both physical and mental effects. Most people get nauseous and dizzy. You may sweat profusely and you may vomit. Ayahuasca is traditionally used as a remedy to help you overcome problems, and the unpleasant physical effects can then be seen as cleansing. You let go of your excess ballast, so to speak. So in that sense, vomiting is a positive thing.

Then the real trip begins. Ayahuasca can have intense psychedelic effects. You may experience considerable hallucinations, ranging from moving patterns, to changes in the shape of people and other objects. You can see special visions, intense colors, dream-like images, and also it is possible that you will meet (extraterrestrial) creatures, animals and plants and other creatures. Ayahuasca is still widely used, especially in South America, in ceremonies and rituals. In the West, too, the drink has gained prominence and people use it to gain insights and for personal growth.

The effects of magic mushrooms

Shrooms are a lot better known here than ayahuasca. The active ingredient is psylocibin, which can be found in more than 200 mushroom species. For thousands of years, man has known of the special magical power of magic mushrooms. Evidence of this has been found in caves, where cave paintings depict the story of magic mushroom use by shamans. However, magic mushrooms are still popular today, where they are used for tripping, as well as for health. You can eat mushrooms raw or dried or make tea from them.

The effects of magic mushrooms vary by strain and also by dosage. If you take a small dose, you may notice mild visual hallucinations, such as brighter colors and heightened senses. If you take a higher dose or choose a more potent magic mushroom (such as McKennaii), the hallucinations become more intense. Even then, like when you use ayahuasca, you can meet strange beings and gain enlightening insights. With magic mushrooms, you can also completely lose your sense of time and of yourself. A mushroom trip can last up to 6 hours. 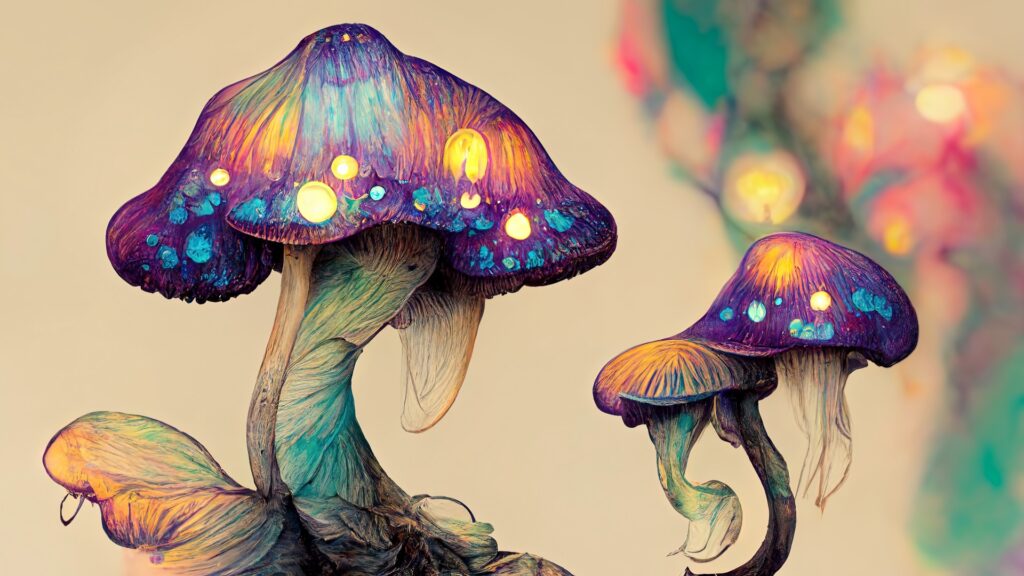 These are the differences between magic mushrooms and ayahuasca

On a molecular level, magic mushrooms and ayahuasca are not very different. Psylocibine and DMT both belong to the family of tryptamines, and in fact they are so similar that you could consider psilocybin a form of DMT. Scientists suspect that tryptamine plays a role in transmitting signals between neurons and that that is what causes the mind-altering effects of magic mushrooms and DMT.

In terms of hallucinations, the two drugs are fairly similar. What sets magic mushrooms apart from ayahuasca is the sense of loss of reality. In the process, magic mushrooms can help process emotions. It may just happen that intense feelings are released during a trip or that you relive your past. They can help you gain profound personal insights. On the other hand, magic mushrooms are also known to make you appreciate the world around you more. You suddenly see the stunning beauty of trees, mountains, the sea and even the people around you. This allows loneliness and anxiety to dissolve and you feel more connected to everything around you. 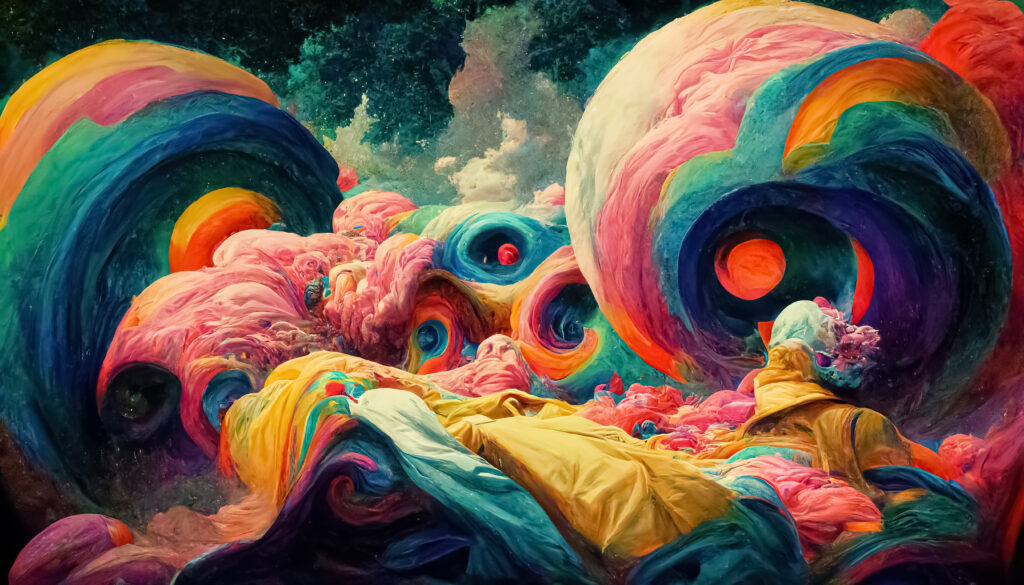 But in what ways do the two substances now differ in their effects? We could go into more detail about this, but keep in mind that user experiences of these types of resources are obviously very personal. Everyone reacts differently to psychedelics. But overall, you can say that ayahuasca gives a more spiritual trip than magic mushrooms. You could say that there is a good chance you will receive wise life lessons during an ayahuasca experience.

Whereas magic mushrooms often promote your sense of connection with the world, ayahuasca will actually allow you to have a deeper spiritual experience. The feeling is more cosmic, where you can get insights about life and death, or meet spiritual and extraterrestrial beings. DMT users report that they have had wonderful encounters with deceased people, fairy-like beings and even Gods. Some people who have experienced the effects of both DMT and psilocybin report that DMT is more potent than psilocybin.

However you look at it, magic mushrooms and ayahuasca can each give you a wonderful, intense trip in their own way. They have different effects, but it is not easy to put that into words. If you don’t know which of the two you want to try, go by your gut. Which resource attracts you the most? If you want to go on a trip, make sure you dose correctly and arrange for a trip sitter to keep an eye on you during the trip.

What is an infrared sauna and what are its health benefits?

Facing your greatest fears with psilocybin

The 5 benefits of incense