Dealing with other people, maintaining social connections, having conversations with strangers, that can be quite complicated for most people, let alone when you have an autistic disorder. People who have ASD (autism spectrum disorder) usually find it difficult to pick up on the subtle signals used during communication. As a result, they have difficulty maintaining relationships and may feel isolated. Can microdosing help you feel that connection with others?

For most people, much of the communication goes unnoticed. You often don’t even know how many small signals you pick up and process: intonation, subtle movements of the eyes or hands, body language and facial expressions. You catch them subconsciously and process them immediately. In someone with ASD, this does not work so well. These people have difficulty making contact with others, feel little empathy and this can possibly stand in the way of a (friendship) relationship.

However, on the internet you can read stories that show that microdosing with psychedelic substances can help. That can be done with psilocybin (from magic mushrooms or truffles) or LSD. For example, there is the story of Aaron Paul Orsini (he even wrote a book about his experiences, Autism on Acid). He felt so disconnected from others, he didn’t understand other people, and he couldn’t manage to have meaningful relationships. He felt like he was broken. Therapy or medication did not help.

The effects of microdosing on autism

In desperation, he sold his belongings and went out into the world. At one point he was in a forest and used a dose of LSD. Miraculously, he noticed that he felt a sense of connection, with the whole world around him. The trees, the sunlight, the wind, Aaron suddenly gained insight into the network that is life, with his parents, friends and all the people on earth. A world opened up for him. As he continued on his way he met someone on the street and spoke to him. He said hello and the stranger said hello too. They had a brief conversation and it felt so natural. This is a small thing for someone who has no trouble with this, but a huge change for someone with ASD.

There are more stories of people using (microdoses of) psychedelics for autism. However, few good studies have been done. In the 1960s and 1970s, LSD was used in an experimental therapy for children with severe autism. No other treatment had had any effect. Whether this research was ethically justifiable is questionable and in addition it was not scientifically well set up. Unfortunately, this also means that no clear conclusions can be drawn. However, the researchers involved claim that the drug resulted in the children responding better to emotions, their mood was positive, they laughed more often and suffered less from obsessive behaviour. Their speech also improved.

Scientists are currently very reluctant to conduct this type of research. The use of psychedelics is quite controversial. Nevertheless, it is possible that these drugs can have very interesting effects for people with ASD.

How does microdosing work in autism?

What is notable about microdosing is that people on the spectrum of ASD may not respond quickly. Recently, a review was done among a mixed group of people who microdose. Those who had ASD did not notice significant improvements in their symptoms. The reason for this can be found in the results of a study from 2006. This showed that people with Asperger’s have a lower density of receptors for psychedelic molecules to bind to, in key areas of the brain. It involves the serotonin 2A receptors.

This may explain why microdoses seem to have little to no effect on symptoms of autism. These people have a higher tolerance for doses of psychedelics. It is also true that the density of serotonin 2A receptors in the brains of these people is inversely proportional to their social skills. So those with the fewest receptors, also perform the worst socially.

It is known that people with autism have weaker connections between important regions of the brain, compared to those who do not have autistic symptoms. This is especially noticeable when people have to perform in the area of “theory of mind”. These are skills needed to connect with others socially and emotionally.

There is also a reduced connection between nodes of the “default network“. This network has many different tasks, for example it is active when someone is thinking about others or themselves, reminiscing about the past or making plans for the future. It is therefore also important for self-reflection, theory of mind and sensing others.

How microdosing can help

What psychedelic drugs like LSD and psilocybin can do is increase the connectivity of different areas of the brain. By expanding these connections, even if only temporarily, people with ASD spectrum can gain flashes of insight into a world of social interaction that they previously had no access to. Their strength often lies in an extreme focus, being concerned with small details. However, this super power regularly makes them lose sight of the bigger picture, especially in the area of social interaction.

Microdosing can help you get a better grip on that piece of the world. And that can be incredibly important. This gives people with ASD the feeling that they are not alone in the world, but also part of the human network. And it allows them to actively participate in it, to make and maintain friendships with a sense of self-confidence.

Aaron Paul Orsini stresses that it is not safe to experiment with LSD on your own. Fortunately that is not necessary: microdosing with psilocybin is safe and legal. Do you want to experience what microdosing can do for your autism symptoms, check out the webshop and order the convenient packs of Microdosing XP. Each dose is ready-to-use and individually packed. That way you can be sure you’re taking the right dose. 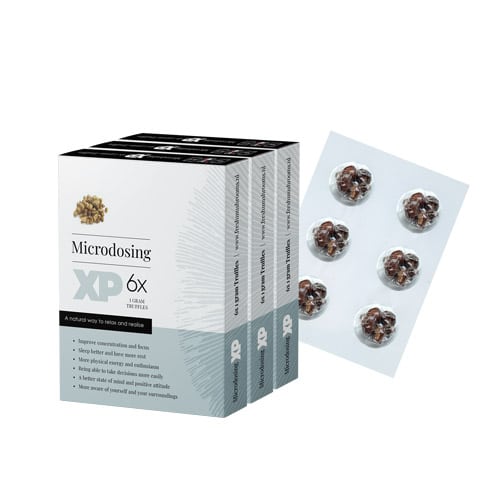