Support your resistance with Turkey Tail or the Elf Bench 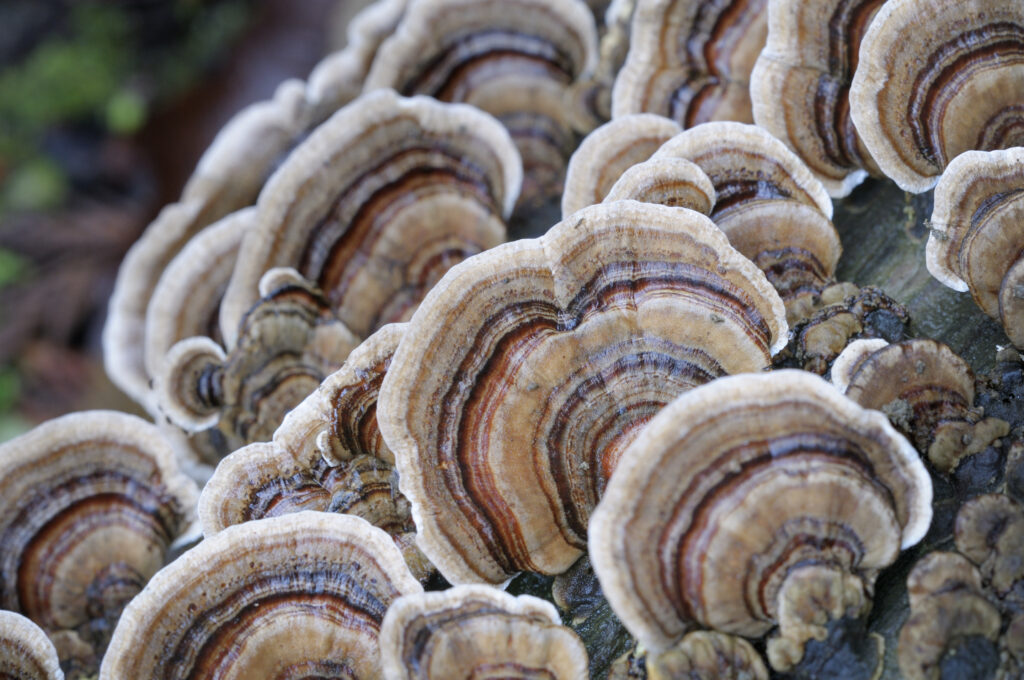 Turkey Tail or the elven bench what is it ?

Mushrooms are Mother Earth’s medicine cabinet. They are rich in powerful acting substances that can help with all kinds of conditions. Now you will probably think that these mushrooms are found in faraway countries in exotic forests and not in the forests of our own little country. But nothing could be further from the truth. This inconspicuous fungus that grows on rotting wood may just be encountered during a walk in the woods near home.

In this blog, you can read all about the Elf Bench (Turkey Tail) and what it can be used for.

A familiar sight: the elven bench

In the Netherlands, the Elfenbankje is one of the most common fungi. It likes to grow on rotting wood and almost everyone has seen one. The fungus grows perpendicular to the tree trunk (preferably on deciduous trees), making it a very suitable bench for fairies to sit on. If you look closely, you can see that the Turkey Tail is actually quite beautiful. It comes in a variety of colors, from white, gray or beige to orange or black. It forms colorful bands and stripes, to which its Latin name, Versicolor, also refers.

Turkey Tail can be eaten, but it is not very tasty. If you do want to use the mushroom fresh, you can make tea of it or dry it. It is best to take a young one then, they are still the best to work with. 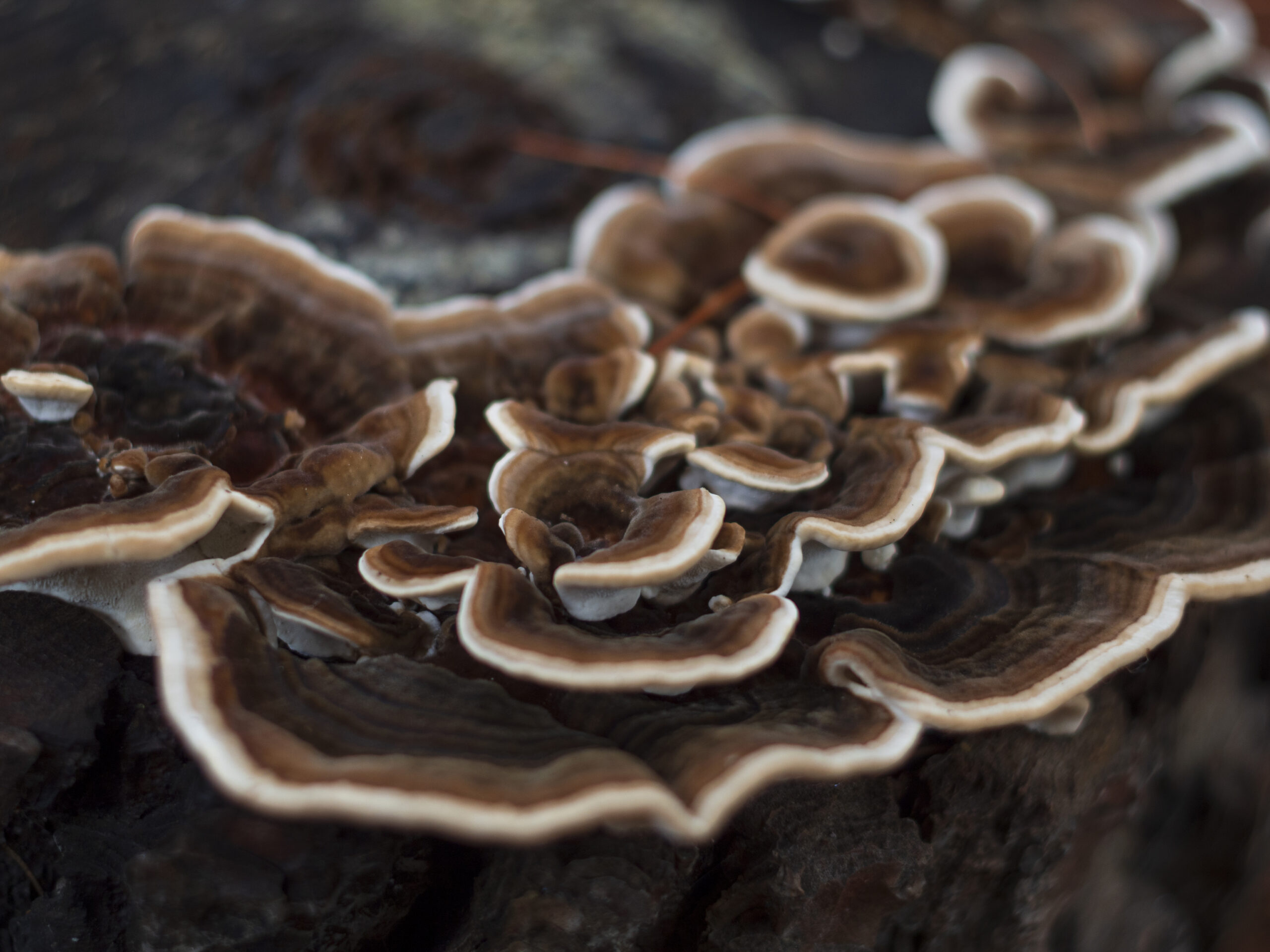 The Turkey Tail is also found in the Far East and has been used there for thousands of years. Its medicinal properties have led to legends, telling of people who became immortal by taking Turkey Tail. Currently, there is a lot of research being done on how this mushroom works. Most of the medicinal substances are in the fruiting body (the part of the fungus you see growing on the tree).

These include polysaccharides, antioxidants, beta-glucans, coriolan and ergosterol derivatives. These substances can have a positive effect on resistance, can help with cancer and fatigue, and have an immuno-modulating effect (balances the immune system). This is why Turkey Tail has traditionally, and still today, been used for overtiredness and exhaustion, autoimmune disease, viral infections, Lyme disease, cancer and HIV. 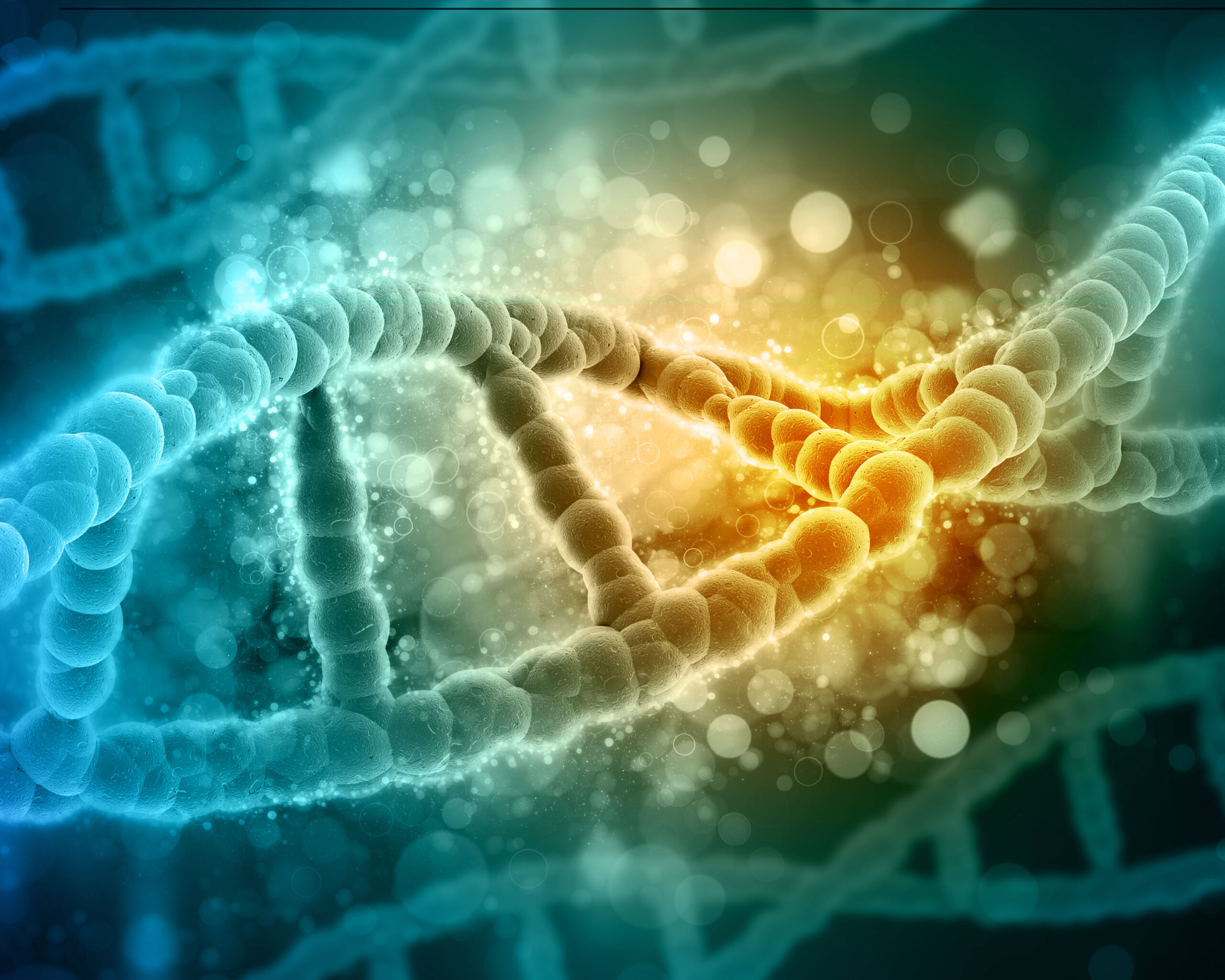 Research on the operation of Turkey Tail

As mentioned above, the Elfin bench is in the spotlight. Scientists are eager to shed more light on the medicinal properties of this fungus. Below you can read more about what is now known.

There are many mushrooms that have properties that can help with immune problems. In the study below, 6 mushrooms that are non-toxic were chosen and examined more closely for their anti-cancer effects. One was Turkey Tail. The patients in this clinical trial had gastric, esophageal, coloreactal and breast cancer. These studies show that the immune system plays a role in preventing breast cancer. Turkey Tail’s properties may have a positive effect on the clinical course of breast cancer.

In fact, medication based on the polysaccharides from Turkey Tail has now been developed. A Japanese company has developed this specifically for use during cancer treatments. The drug PSK can be used in various types of cancer. Animal experiments and in vitro tests showed that it has potent antitumor activity. It can prevent cancer from spreading (inhibits metastasis) and stimulates the body to make more killer cells. These are essential for resistance.

Several studies have shown that in people using Turkey Tail, their killer cells doubled within 2 months. PSK can also be helpful if you are receiving radiation or chemotherapy to reduce the inconvenience of side effects. The studies concluded that PSK can extend the lifespan of cancer patients. This applies to patients with different types of cancer.

The benefits of Turkey Tail in autoimmune diseases

Turkey Tail may also be able to help with autoimmune disease, such as MS, Guillain Barré, scleroderma, Crohn’s disease or celiac disease. In such diseases, the immune system does not work properly. Normally, your resistance ensures that unwanted invaders such as viruses and bacteria do not have a chance to make you sick. In an autoimmune disease, the immune system turns against yourself and your own immune cells attack normal body cells. This leads to damage to tissues and organs. Symptoms vary from condition to condition and from person to person.

A 2008 study shows that Turkey Tail can influence resistance. T cells (helper cells) play an important role in autoimmune diseases. They cause problems in the body because they can run their course unchecked. They cause inflammation and prevent organs from functioning properly. Other cells are responsible for controlling T cells.

When you take Turkey Tail, it prompts the body to restart the immune system. This reboot will cause the T cells to be less active, and their uncontrolled responses will decrease. Possibly the symptoms of the autoimmune disease diminish and may even disappear. 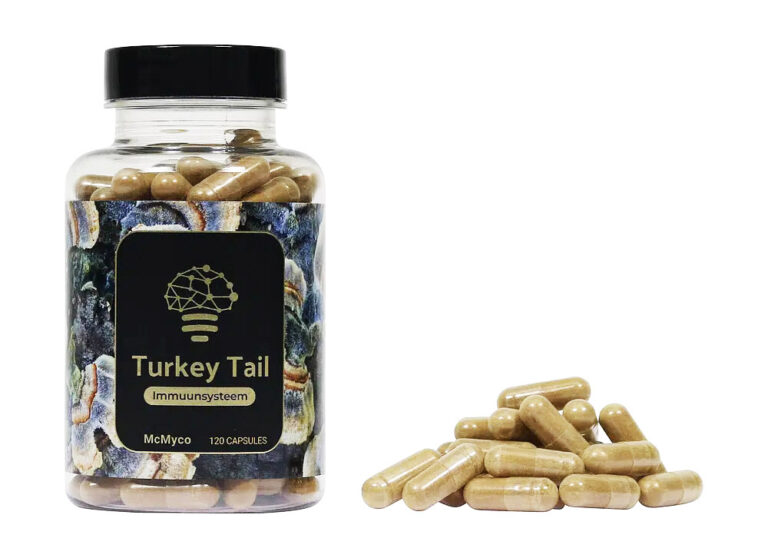 If you are often tired, then Turkey Tail can also be a good solution. He can help you get more energy. People with chronic fatigue, HIV, hepatitis or fibromyalgia could use this mushroom. With fatigue, decreased immunity also often plays a role. Dormant infections, such as Candida Albicans, Lyme disease or Streptococcus often take a lot of energy. Turkey Tail boosts your resistance at and also has antimicrobial, antiviral and antifungal properties.

Would you like to use Turkey Tail for illness, fatigue or problems with your resistance? In our shop you will find Turkey Tail extract from Foodspores and Turkey Tail capsules from McMyco. Turkey Tail is safe to use, only if you are hypersensitive to mushrooms should you be careful